If you are lucky, a wise person might have told you that life is all about ebb and flow.

We live in a world where we can fool ourselves into thinking that we can flow all the time, anywhere, anyhow, regardless of how you’re physically or emotionally feeling; or that we “are allowed to stop just long enough to get back on the treadmill of extreme productivity”.

We are made to feel that if we need to stop, we’re ineffective, useless, worthless.

We can take coffee, sugar, energy drinks, ginkyo biloba, caffeine, guarena, water, low GI foods, iron supplements, any supplement, get exercise, get massages, rebalance your chakras…to keep going, to fill us up with fake fuel and trick our minds and bodies into carrying on.

When did we lose our respect for pulling back and resting?

Life on this planet is largely dictated by the cycles of the seasons, moon and tides – an ebb and flow, not an unending summer – but even nature would prefer an unending summer, to continuously grow and reproduce.

When I motorbiked across Europe and into Austria to be with family in August 2013, one of our last stop-offs was at my sister-in-law’s beautiful farmhouse in the countryside outside Vienna.  Our brother-in-law asked us to help him pick the plum trees from a neighbouring farmer’s land because the farmer wasn’t looking to harvest them and they would otherwise go to waste. 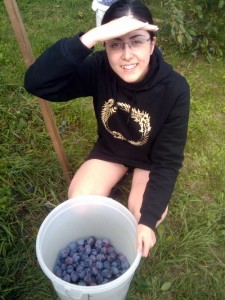 Plum picking in Austria.
Yes, that is an Elder Scrolls Online hoodie – *I got there first!*

The summer of 2013 was very hot and long, and these plum trees were in the full sun all day, all through the season; consequently, the four trees were groaning under the weight of globular, soft and extra-sun-sweetened plums.

One tree had no cover from the sun whatsoever, no shade cast by the nearby buildings to hide in, so it sat in 360 degrees of sunshine all through that summer.  And it showed – the branches were heavy with plums…so heavy that the tree broke in half!  It fractured right down the trunk under the sticky sweet masses it had produced!

We got to this tree and unburdened its fruits – all 75kg of it from just the one tree! – but it was too late, the tree was dying a quick death in the continuing scorching sun, its life purpose entirely fulfilled.

The other trees that had shade, amongst themselves and from the buildings at the right angles from the sun, probably produced about 50-60kg of fruit each and lost the odd branch, which is still a huge harvest, but they survived that beautifully gruelling summer and lived to bear more fruit in the coming years.

Even nature prefers unending summers, and might not like trying hard to survive the winters, but without autumn and the  survival of winter into spring, deciduous leaves wouldn’t fall and create the mulchy beginnings of compost to bring the cycle back around – all the nutrients of the soil would be taken in continuous growth, unless or until it kills itself in growth.

A species set on endless growth is unsustainable.

We must rest in order to grow and produce – we must ebb in order to flow.  It’s part of the cycle.

“The courageous life is the life that is equal to this unceasing tidal and seasonal becoming: and strangely beneath all, stillness being the only proper physical preparation for joining the breathing autonomic exchange of existence.”

When did we lose our respect for pulling back and resting?

We lost our respect for the ebb when “being productive” became the mantra for society.

If you’re not being productive, you’re being lazy, which has many negative social connotations, as I’m sure you well know.

Before unions, it was beaten into us that this was the case.

But there is a difference between being lazy and being idle.

Being idle is when you deliberately rest, ease back into yourself, knowing and probably anticipating with glee the next flow.

The tricky part is that, on the surface, it looks no different to “laziness”, but underneath it really is very different.

2 thoughts on “In Praise Of The Ebb Before The Flow”