Nobody belongs in the kitchen.

This meme that has been making its rounds around t’internetz over the last week or so: 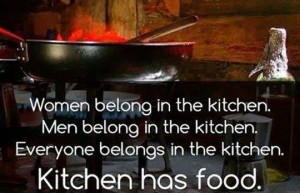 Initially, I thought, “Yes, that’s right – everyone belongs in the kitchen.”  But then it smacked be ‘round the face smellier than a three day old wet salmon: 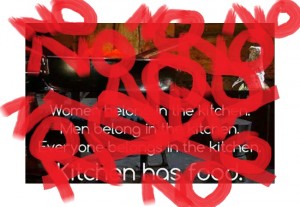 It’s pretty obvious that the intention was to play on the old sexist notion of “women belonging in the kitchen” and make it equal.  But it still gets it wrong.

It’s the word “belong”.  “Belong” is a strong word.  It infers obligation and duty, in this instance, for someone be placed in the kitchen regardless of what that someone desires.  To say that everyone belongs in the kitchen infers that nobody has a choice in the matter, which is clearly not what was intended in the meme either.

If we have to use the word “belong”, it’s better this way:

“Nobody belongs in the kitchen, *they go there if they wanna be there*”.

…but I’d rather scrap it in this context.  It’s too messy.

Maybe I’m splitting hairs here, but it’s an important distinction to make.  It’s easy for anyone to find my blog and within reading a few pages or blog posts think that I’m telling everyone that they belong in the kitchen, and should be cooking amazing food, and everyone should be sitting at the table with classical music in the background with everyone chowing down in glee.

But that is not the case (believe it or not).

Recently Nigella Lawson has been lamblasted for “sending mixed signals” as to her opinions on feminism in The Daily Mail on 20th October this year, namely because of her famous book “How To Be A Domestic Goddess”.  She claims that the pin-up style pictures at the end of the book were clearly ironic, “except for those who choose to misread my intent”.  According to my sources, her actual position is that cooking, and any other arts that are traditionally associated with “women being at home”, should be for everyone, and her role is to help everyone get comfortable with it – a far more egalitarian view than one normally associated with her when you look at how she is portrayed in the media, in her books and TV shows.

So I’m gonna put down my mark, just to be clear if I’ve been ambiguous in the past:

Get in the kitchen and cook if you want to.

If you’re going to cook, then cook food that is amazing to you.

Eating at the table with your friends and family is a wonderful thing, but don’t feel obliged to do it, certainly not by me, or if you have circumstances that otherwise make it difficult or impossible.  Classical music is optional, as are dimmer switches, candles, flowers and other bits and bobs that people tell you make for a better meal.

Allow me to help give you ideas and expand your options.

Allow me to help you figure out what it is you want to do.

Allow me to help you to do it your way.
You got the rest, I trust you.