Sorry for being away for a while suddenly, I’ve had burn-out.

I had been pushing too hard for too long, and after a sudden rush of illnesses in May, I had to slam the brakes and heed my mama’s orders to stay with her for a week while my dad went on the motorbike trip I was meant to go on with him, my uncle and a family friend.

So, on mama’s orders, I went to stay with her for a week.

(Because mum knows best – and she might be small, but defying her orders has scary consequences…)

END_OF_DOCUMENT_TOKEN_TO_BE_REPLACED

Last week I encouraged you to find your Big Why To Cook In 2014.

Celebrity Chefs, cookbooks and cooking courses teach you skills to improve your cooking, which generally is what we think of if someone talks about “how to cook” – we also think of Delia’s book series on this very topic.

But your cooking skills are only part of the bigger picture.

Even if your kitchen was armed to the sink with appliances, knives, books and a cup of tea, and even if you can use them well, it is only part of the bigger picture.

There is an entire ecology that determines how each of us cooks and whether the resulting dishes are good to your tastebuds.

END_OF_DOCUMENT_TOKEN_TO_BE_REPLACED 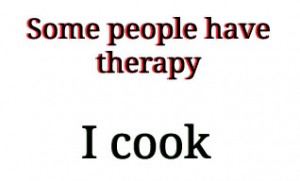 Specifically, I’m asking you all to take care of yourselves.

(although those are great things to have (make mine a vanilla full-fat latte with cinnamon lightly dusted on top please)).

(although I do confess that drinking 2l of water with other drinks like tea, soda and coffee as “extra” each day instead of the other way around, is the single change that has made me feel healthier above everything else).

I’m talking about doing the things that make you feel alive – at least once a week.

END_OF_DOCUMENT_TOKEN_TO_BE_REPLACED

Does anyone remember that BBC daytime TV show in the 1990s called “Can’t Cook, Won’t Cook” with the ever-irrepressable Ainsley Harriott?   He used to get one person who can’t cook in one corner and another who won’t cook in another corner, and teach them step by step how to make something in front of a live audience.  I grew up with this show so it’s a bit of a blast from the past to have found an episode on YouTube:

(there is another part also available to watch linked through that episode if you’re really keen!)

Sometimes the reason why the Won’t Cook chef didn’t cook was because he/she couldn’t cook, which meant that occasionally it was actually a show of  “Can’t Cook, Really Can’t Cook”.

Sometimes the Can’t Cook chefs were a bit like Bender from Futurama – desperately want to cook and enjoy it, but end up doing something a bit odd.  We all know someone who’s done something a bit odd – like put hamburgers in the toaster to cook them, or decided that they couldn’t be bothered to chop up the onions and tried to blitz them instead in a smoothie machine…

END_OF_DOCUMENT_TOKEN_TO_BE_REPLACED

The current buzz-word in high-end food circles these days is “Umami”.  It’s a Japanese-coined word based on “Umai”, meaning “tasty” (although as a kid I’d say “Umeh”, which is the slang version of “Umai”…most men would also say “Umeh” as well…as a girl or lady, I’d actually say “Oh-iishii”, which means delicious/tastes good).

On Wikipedia it is described as the 5th category of taste: a sort of savoury taste that is very satisfying to the taste-buds, the special something that gives food a particular depth of flavour:

END_OF_DOCUMENT_TOKEN_TO_BE_REPLACED

No, I’m not talking about sticking vegetables in dodgy places where the sun doesn’t shine – just thought I’d clear that up!

I’m talking about reconnecting with food at a primal level.  We are so obsessed with the nutritional value of food that it’s become difficult to truly enjoy and celebrate it any more.

Yes, without question, it’s good to know what you are eating and where your food comes from.  But it’s so much more fun and valuable to go into the kitchen and just stop, stand still, take a deep breath in and slowly breathe out…and get primal with the food you’re about to make: