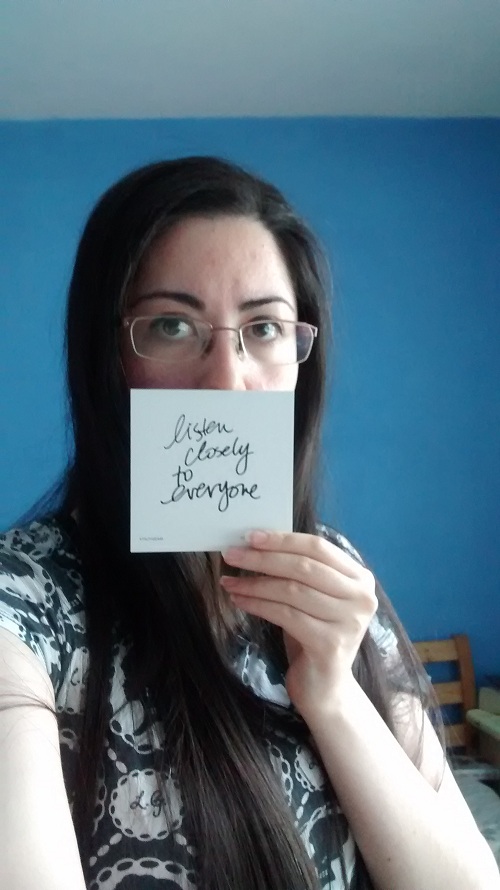 #TruthBomb from Danielle LaPorte that resonated the most this week

I work about fifty metres away from the crossroads where it happened and have to pass by this site every day multiple times a day.

Monday was a lovely, warm and hazy afternoon, it looked really promising for a nice evening after a long day.  And unfortunately, I bounded out of work gleefully into the rising hysteria surrounding the accident.

I won’t go into the details of what I saw – nobody should ever be exposed to that, especially not fellow motorbikers, scooter and moped riders, and I’d even caution against cyclists reading too many eyewitness accounts.  Suffice to say, it’s a biker’s worst nightmare that I witnessed, and I am still coming to terms with it all.

This road – the A23 at Streatham – sees many accidents.  Since I’ve had to start working there after my job was moved back to that place, I have seen at least an accident a week from the windows.  Pedestrians are regularly hit when trying to cross the roads because this major through road is also their local high street.  It feels like twice a month there are car collisions here.  And in the meantime, fellow bikers and scooter riders are weaving sometimes perilously through the traffic, although I haven’t seen too many riders knocked off here thankfully.

When you are exposed to that many accidents outside your window, it becomes a horrible part of the life of being there.  It can cause you to lose a certain empathy towards those scenes, because it feels like you can’t possibly give out enough sorrow, sympathy and peaceful wishes to them all when there are that many who demand it.  I’ve had to learn to divorce myself from the accidents outside our windows, to send out satellite calls of sympathy, peace and strength to each person affected, and to then carry on working in our daily temporary fortress.

But this time, I was faced with another accident unlike all the others.  I fled the scene.  I had to get home.  If I didn’t use the adrenaline towards running away, I’d have been rooted to the ground and forced to take in even more.

I had to get to my safe haven.  I had to get home.  I turned up the volume of the music in my ears to help me shut out the horrors of the world and marched as hard as I could towards my train station.  My legs and lungs were burning, but I had to keep going, I had to go home so that I could collapse in safety.

I realised it was for me and spun around.  A mother with a pushchair and her dozing toddler ran up to me.

“You dropped this.”  Part of a Magnum White ice cream packet.

“Well, will you throw away your own rubbish?”

Excuse me?  There’s a man lying dead in the road half a mile away, I just seen things I wouldn’t wish on my worst enemy, and you’re worried about a fucking piece of litter?  And you’re not even going to listen to me?  Don’t you know that you can’t trust your eyes and ears?  Just because the wind blows something in your direction doesn’t mean that it’s come from the first person you see; and since when were these supposedly well-educated people so unevolved that they have become judge, jury and executioner in one?

Oh right, sorry – parenthood does that to some people; for some people (and please, it really is a small minority of people, including those whom I unfortunately seem to live next to as well), it gives them exclusive rights to behave badly towards others.

May you and your child remain innocent lambs to the world’s horrors.  Reasoning is wasted on you.

I threw away that piece of litter since she was so ignorantly indignant.  Why the hell not.  Make that mother’s world a better place.  Maybe making her world a tiny bit better will make mine less horrific for that moment.

I eventually made it home to my other safe fortress, since the daily temporary one has been breached.  Vodka helped with the initial shock and horror.  As did sleeping pills.  And I’m eternally grateful to all my friends who reached out to me that night.

I did make it into work the next day.  I had to prove to myself that the whole had all been cleaned up, that things were more or less back to normal, and I needed to pray.  I’m not religious, but I am Japanese, and I pray to calm the disturbed spirits and clear the air.  It’s a comforting ritual that helps in times like these.

I recognise that I’m in shock and still riding it out.  Time will help, I know it.  I’ve been in shock many times before, although this is the first time I’m in shock and not a physically injured party.  Time is already helping in putting some distance from it all.

Anxiety has started to kick in a bit.  My first waking thought currently is:

“I don’t want to go outside – as a motorbiker, I’m scared of the world.”

I can trust that everything will be alright, and get out into the world each day.  It is however getting increasingly difficult for me to return to Streatham for work, as I near the epicentre of the incident and have to work next to it for the next 8 hours, then pass back over it, and feel calmer the further away I go from it.

Flashbacks do happen.  I can handle them when it’s just the visual flashbacks.  When it’s the emotional flashbacks?  Oooof.

Part of my day job is to take incoming phonecalls, and I took a call later on in the week that suddenly rocketted my heartrate and left me struggling to breathe.

“I’ve had heart surgery recently and you’re telling me that I have to do X, Y and Z!  I’ve suffered enough and you’re piling more onto me!”

You’re not the only one suffering.

I was signed off for the rest of the afternoon and went home.

“Listen closely to everyone.”

…and be kind whenever you can.  Grow up out of all your self-righteous anger, please; it’s one of the things that is polarising and tearing the Western world apart:

“What we have named as anger…[is] the unwillingness to be large enough and generous enough to hold what we love helplessly in our bodies or our mind with the clarity and breadth of our whole being. What we have named as anger on the surface is the violent outer response to our own inner powerlessness, a powerlessness connected to such a profound sense of rawness and care that it can find no proper outer body or identity or voice, or way of life to hold it.”
– David Whyte, “Consolations”

Because, the reality is, we just don’t know what each other is going through.  There’s no reason for that mother to realise that I was, and still am, in shock, and that if you want something done, you’d better do it yourself.  There’s no reason for the man on the other end of the phonecall to know that I am also suffering, albeit for other reasons.

But here’s the thing: we all need each other.

It was Pam Slim who taught me this last year – she guest-lectured on a program I was on.

And she’s so right.

But we all still need each other, whether we like it or not at times.

Sometimes I think that the Japanese have it right in this respect – in being incredibly polite and trusting to everyone and anyone, even if you know underneath it all that it’s just on the surface and faked to a degree, if you can get over yourself for just long enough, you will see that they appreciate this one crucial aspect to living:
We all need each other.

So listen closely to everyone.  Be kind wherever you can.  Grow up out of your self-righteous anger, please.

Because we just don’t know what each of us is silently suffering with.

I wish the rider peace.

I send soulfelt condolences to the family of the rider and wish them solace.

I send and hope for peace for the driver directly involved.

I wish and hope for peace for the rest of us who witnessed it.